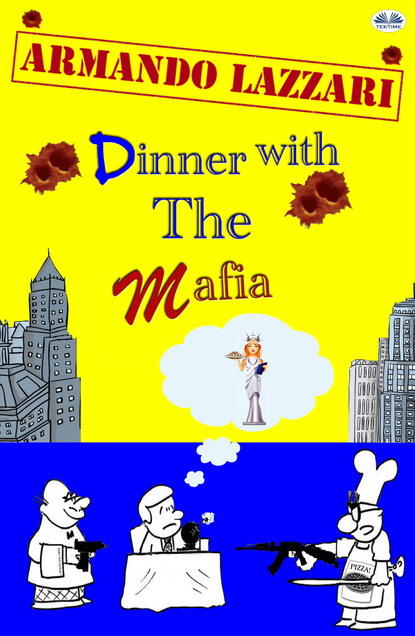 Dinner With The Mafia

Читать онлайн «Dinner With The Mafia»

Dinner With The Mafia
Armando Lazzari

A comedy about a thirty year-old New Yorker who is in the dark about his family's mafiosa activities and finds himself involved in a vendetta between families and on the hunt for an elusive treasure.

“Brilliant and dynamic, you will be thrown into an exhilarating adventure for the hunt of a hidden treasure in a captivating New York; in a world where the word 'Mafia' will make you smile. Riddles, pursuits and a comedy of errors surround the characters in a vortex of gags, unaware that they are the center of attention of the 'Family' that wants to protect them; of the ruthless rival mob that threatens them for the loot; and the interest of two confused cops who stalk them in an attempt to figure out what's going on.”

“Take a slice of 'The Big Apple' and add two good kids: Ben and Susan. Now blend that with a strong and determined mafia 'Family' that blackmails them, and mix in the frenetic pursuit of a hidden treasure. Spice it up with fervent cops hot on their heels and above all, don't forget to garnish everything with yet another New York rival 'Family', whose Boss is the uncle of the young Ben, that has always protected him. The secret ingredient: Ben must never know about his uncles' true 'business' and must continue to believe that they are honest workers, due to a promise made at the time of his father's death. Serve this in a brilliant and dynamic setting, accompanied with a fresh liveliness…of puzzling riddles, misunderstandings and never-ending pursuits.”

Dinner with the Mafia

Dinner with the Mafia

Title | Dinner with the Mafia

Cover edited by the author

This novel is entirely a work of fiction. The names, characters, locations, incidents, historical facts that existed or that are in existence portrayed in this book are the work of the author's imagination. Any resemblance to actual persons, living or dead is entirely coincidental.

All rights for this book are reserved and belong exclusively to the author.

my children, Alexander and Nicole

my mom and dad, Marisa and Augusto

my in-laws, Ines and Sandro

and… to all my friends and relatives who remain in the telephone directory and who will purchase at least one copy. For the rest, you are consigned to a good and fair God who will strike you down with lightening until you burn to a crisp.

“Imagination is a quality that was given to man to compensate for what he is not, and a sense of humour is provided to console him from what he is.”

Toxic white smoke rings slowly surfaced upward, joining the dense cloud of smoke that had already enveloped the room. The pungent odor of cigar filled the study, clinging to every object. The walls of the room were so saturated by the fumes, they seemed to be the very cause of the stale and emanating smell.

The man sitting at the head of the table was the cause of this miasma, mechanically blowing smoke from his mouth while meditating intently on a memory. A fresh memory that hurt deep down and would scar him forever, leaving dark circles under his eyes. His name is Joe Santini, and he had just witnessed the murder of his brother, Angelo, whose death was an image that no man could erase from memory.

Of the other three men in the room, only Carmine D'Abbate sat with him at the table in silence, pouring himself a glass of red wine and staring at Joe with bulging, haggard eyes.

Frank “Drummer” Colombo stood leaning against the windowsill watching the rain pour down, drumming his fingers in rhythm with the chomping and snapping of his chewing gum. Drummer's apparent calm had been proven an illusion many times, given his ability to kill a man with the same understated manner as perusing the morning edition of The New York Times.

The third man, Johnny Greco, chain smoked and paced restlessly back and forth like a pendulum. Only one single, lewd word kept coming out of his mouth. “Fuck, fuck, fuck…”

Carmine spoke in his usual calm and reassuring way, “Here Joe, have another glass. It'll do you good. This is the good stuff, not that crap from the supermarket. This comes from Italy.”

Johnny, high-strung by nature, couldn't stand the apathy and resignation one second longer. “Knock it off with the fuckin' wine, already! You trying to get him drunk? He's still gotta tell us what the fuck happened!”

Carmine was from the old school and didn't like Johnny's foulmouth language. “All you know how to say is 'fuck'. Cut it out. Besides, can't you see he's still in shock? Damn, show a little respect! He just lost his brother, for crying out loud.”

“That's exactly my point. I respect him. And I've always respected Angelo. I've been standing around for two hours doing nothing and I'm sick and tired of wasting time. I want to know right this minute who did it so I can go tear his head off with my bare hands. Fuck!”

Carmine stood up fast, knocking the chair to the floor. Pointing his finger at Johnny, he said, “I swear to you, if you say that word one more time, I'll rip the tongue out of your mouth and feed it to the dogs!”

“What do you want, hah? I can't even talk now? What are you, my mother? If I want to say fuck, I'll say it as much as I want: fuck, fuck, fuck,” said Johnny with all the arrogance and insolence his youth could muster.

Carmine was as good as his word. “I warned you, you stupid idiot! Now I'm gonna crack your dumb skull open so you can fill it with all the filthy language that you want!”

Johnny loved nothing more than a challenge. “Come on, fat-ass. You're full of shit. You think I'm afraid of you?” dared Johnny.

While they both attacked each other, wrestling like a couple of kids over a toy, Frank pulled his silver revolver out of its holster and shouted, “Knock it off for Christ's sake, you're grown men and you're acting like a couple of spoiled brats. If you don't stop it right now, I'll shoot you both in the knees. That'll give you something to cry about.”

Heedless to Frank's threat, they kept brawling until Joe spoke in a faint voice, “Knock it off or this lunatic will shoot both of you.”

Shocked by Joe's tone, they immediately stopped fighting. All three moved close to the table in reverent silence, waiting to hear what he had to say.

“It was supposed to be a two-man job because we didn't want to attract too much attention,” said Joe. “At least that's what the Boss told us. We were supposed to wait on that damned hill about three hundred yards away for the armored van to pass, hit the tire with the sniper rifle, then wait for our accomplice to get out after he'd knocked out his partner, grab the briefcase with the diamonds and run to the hideout. Clean and easy, just like that. But I knew better. There is no such thing as an easy job where everything goes smooth as silk. Anyway, when Angelo took his shot, both tires exploded and the van went off the road, rolled into a ditch and flipped over.

“We watched and waited, but nobody got out. Pretty soon, a gray Chrysler came speeding up, and two guys with rifles got out and opened the doors of the van and opened fire like crazy on those poor guys, shooting them like dogs. Angelo and I looked at each other and decided to do the only thing that we could think of. We fired a couple of shots into the air just to get their attention and try to figure out who they were. As it turned out, they were from the Lucchesi family and had organized the same heist as us. Since nobody knew which one of us had fired the first shot at the van, a heated argument started over territorial rights. We even had a map spread out on the hood of the car. We said the van belonged to us, since the loot came from a jewelry shop in our neighborhood at Bowry and Baynard Streets. But they insisted that the van was found outside of Manhattan in a neighborhood in their district. They ended up pointing their guns at us in hopes of scaring us… but they didn't realize who they were up against, and that's when Angelo lost control. A fight broke out and Angelo killed both of them. But just before one of them took his last breath, he told us that he was the nephew of Don Salvatore Lucchesi and that we could rest assured that his death would be vindicated.

“Then we saw a couple of cars coming toward us and we figured that their back-up had arrived, so we decided to split up and meet up at the hideout later. Angelo grabbed the briefcase with the diamonds and we took off in separate cars.

“When Angelo got here, he had a hole in his gut and he started boasting about how he had told them to go to hell after they'd caught him. He knew he was as good as dead, but he made me make a promise.”

Joe stopped talking, threw back the last of the wine in his glass and turned to look at his dead brother laying in a pool of blood. The other three men looked down at Angelo “The Comedian” who always loved a good joke, sharing the pain of knowing that now he'd only be telling jokes on the other side.

“Joe, what did he make you promise him?” prompted Frank, hoping to bring him out of the trance that he had fallen into.

“He was worried about his son, Benito. No, not worried. He was terrified that his boy would end up like him. As he'd sworn to his wife on her deathbed, he made me swear that I would never, ever tell Benito about him and that he would never have anything to do with the 'family'. He told me that not knowing would protect him. So I made that promise.”

Finished with his monologue, Joe punched the table hard, making the three men jump. “And now I'm asking you to do the same! Swear on your cousin's corpse that you will respect his last wish. Swear it!” They hesitantly stood up, looked surreptitiously at the dead body of their cousin and one by one, swore themselves to secrecy.

It was Johnny who broke the silence, formulating the question that he, more than anyone, wanted to ask. “So now that we've all sworn our honor, did he tell you where the loot is?”

The other two men shook their heads, appalled at Johnny's disrespect and materialism. Frank, especially offended, said, “You never change! How can you think of money at a time like this?”

Johnny didn't even try to justify himself. He just carried on accusing Frank of being a hypocrite. “What do you want from me? Don't tell me that you're not thinking the same thing?”

Joe held up his hand to stop the argument. “Let him ask, he has every right. Business is business. I only wanted you to swear on your honor, and you did.”

They all held their breath, waiting for what was to come.

Joe turned and stared at Carmine. “You know, Carmine, before he passed away, he mentioned you a few times and then he stammered his final, delirious words just before he died.”

Carmine was surprised that Angelo had thought of him at the moment of his death. “Joe, what words?”