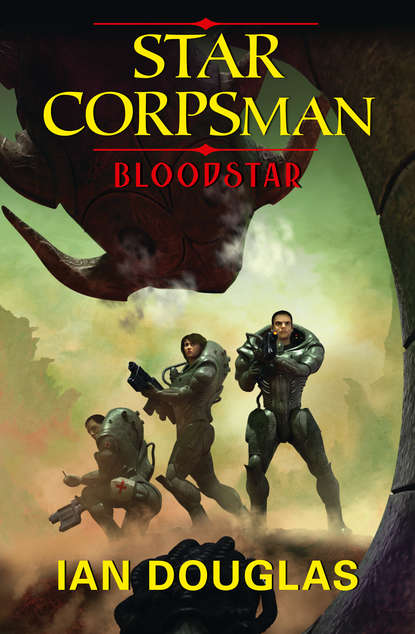 Big, bold military science fiction action from one of the genre’s biggest names.In the 23rd Century, war is still hell…Corpsman Eliot Carlyle joined the Navy to save lives and see the universe. Now, he and Bravo Company’s Black Wizards of the interstellar Fleet Marine Force are en route to Bloodworld – a hellish, volatile rock, colonized by the fanatical Salvationists who desired an inhospitable world where they could suffer for humanity’s sins. However, their penance could prove fatal – for the mysterious alien race known as the Qesh have just made violent, bloody first contact.Suddenly, countless lives depend upon Bravo Company as the Marines prepare to confront a vast force of powerful, inscrutable enemies that unless stopped threaten the fate of homeworld Earth itself. And one dedicated medic, singled out by an extraordinary act of valour, will find himself with an astounding opportunity to alter the universe forever…

As always, now and forever,Brea

The Qesh were solidly in control.

There were armed guards standing at several busy intersections, and small groups of them patrolled the corridors like cops on a beat. The humans we saw watched the patrolling Qesh with expressions ranging from boredom to terror; no one tried to talk with the invaders, and for their part, the invaders didn’t seem predisposed to interfere with the human crowd.

About ten minutes passed before we started getting signal breakup, and then the image dissolved into pixels and winked out. The transmission, shifting around randomly across tens of thousands of frequencies each second, probably couldn’t be monitored by the Qesh, but it could be blocked, by tens of meters of solid rock if nothing else. What we received before that happened, though, had been useful.

And disturbing. If the humans were cooperating with the Qesh, had they already given the invaders access to their computer records?

Had the Qesh already learned the location of Earth?

And how could we find out if they had?

Well, at least not much.

Our Cutlass hit atmosphere at something like 8 kilometers per second, bleeding off velocity in a blaze of heat and ionization, the sharp deceleration clamping down on my chest like a boa constrictor with a really bad attitude. I hadn’t been able to see much at that point, and most of my attention was focused simply on breathing.

But then the twelve-pack cut loose, and my insert pod went into free fall. I was thirty kilometers up, high enough that I could see the curve of the planet on my optical feed: a sharp-edged slice of gold-ocher at the horizon, with a deep, seemingly bottomless purple void directly below. We were skimming in toward the dawn with all of the aerodynamic efficiency of falling bricks. The Cutlass scratched a ruler-straight contrail through the black above our heads, scattering chaff to help conceal our drop from enemy radar and lidar assets on the ground.

The problem with a covert insertion is that the covert part is really, really hard to pull off. The bad guys can see you coming from the gods know how far away, and you tend to make a lot of noise, figuratively speaking, when you hit atmosphere.

But that’s what the U.S. Marines—and specifically Bravo Company, 1

Why do they make our AIs sound like walking wet dreams?

My insertion pod had been a blunt, dead-black bullet shape until now, three meters long and just barely wide enough to accommodate my combat-armored body. The shell began unfolding now, growing a set of sharply back angled delta wings. The air outside was still achingly thin, but the airfoil grabbed hold with a shock akin to slamming into a brick wall. Deceleration clamped down on me once more—that damned boa constrictor looking for breakfast again—this time with a shuddering jolt that felt like my pod was shredding itself to bits.

The external sensor feeds didn’t show anything wrong, nor did my in-head readout. I was dropping through twenty-two kilometers now, and everything was going strictly according to … what the hell is that?

Red-gold ruggedness seemed to pop up directly ahead of me, looming, night-shrouded, below—and huge, and I stifled a shrieking instant of sheer panic. It was the crest of Olympus Mons, the very highest, most easterly slopes catching the rays of the Martian dawn long before sunrise reaches the huge mountain’s base. That twenty-two kilometers, I realized with a shudder, was measured from the areodetic datum, the point that would mark sea level on Mars if the planet actually had seas.

Olympus Mons, the biggest volcano in the solar system, rises twenty-one kilometers from the datum, three times the elevation of Everest, on Earth, and fully twice the height of the volcano Mauna Kea as measured from the ocean floor. I was skimming across the six nested calderas at the summit now, the rocky crater floor a scant couple of kilometers beneath my fast-falling pod. The calderas’ interior deeps were still lost in midnight shadow, but the eastern escarpment, seemingly suspended in a mass of wispy white clouds, caught the light of the shrunken rising sun, and from my vantage point it looked like those vertical rock cliffs were about to scrape the nanomatrix from my pod’s belly. In another moment, however, the escarpment was past, the 80-kilometer-wide caldera dropping behind with startling speed.

The plan, I’d known all along, was to skim just above the volcanic summit, a simple means of foxing enemy radar, but I’d not been ready for the visual reality of that near miss. My pod was totally under AI control, of course, the sentient software flexing my delta wings in rapid shifts far too fast for a mere human brain to follow. The pilot was taking me lower still, until the escarpments behind loomed above, rather than below.

Olympus Mons is huge, covering an area about the size of the state of Arizona, and that means it’s also flat, despite the summit’s dizzying altitude. The average slope is only about five degrees, and you can be standing halfway up the side of the mountain and not even be aware of it.

The slope was enough, though, that it put the bulk of Mount Olympus behind us, helping to shield us from enemy sensors ahead as we glided into the final phase of our descent. The active nano coating on the hulls of our pods drank radar, visible light—everything up through hard X-rays—giving us what amounted to invisibility. But no defense is perfect. If the enemy had known what he was doing, he’d have had whole sensory array farms across the mountain’s broad summit—not to mention point-defense lasers and antiship CPB batteries.