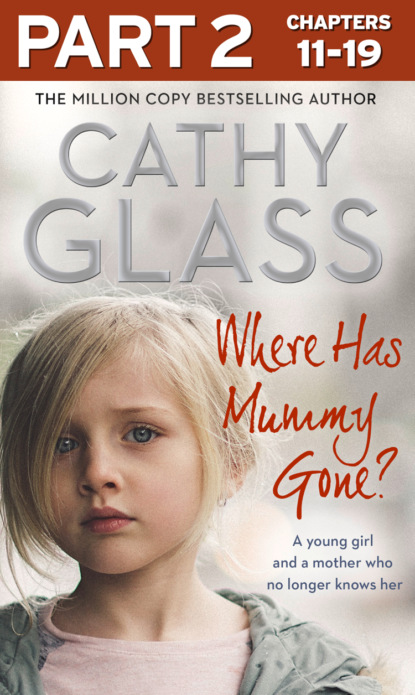 Where Has Mummy Gone?: Part 2 of 3: A young girl and a mother who no longer knows her

Читать онлайн «Where Has Mummy Gone?: Part 2 of 3: A young girl and a mother who no longer knows her»

Where Has Mummy Gone?: Part 2 of 3: A young girl and a mother who no longer knows her
Cathy Glass

The true story of Melody, aged 8, the last of five siblings to be taken from her drug dependent single mother and brought into care.When Cathy is told about Melody’s terrible childhood, she is sure she’s heard it all before. But it isn’t long before she feels there is more going on than she or the social services are aware of. Although Melody is angry at having to leave her mother, as many children coming into care are, she also worries about her obsessively – far more than is usual. Amanda, Melody’s mother, is also angry and takes it out on Cathy at contact, which again is something Cathy has experienced before. Yet there is a lost and vulnerable look about Amanda, and Cathy starts to see why Melody worries about her and feels she needs looking after.When Amanda misses contact, it is assumed she has forgotten, but nothing could have been further from the truth…

Certain details in this story, including names, places and dates, have been changed to protect the family’s privacy.

An imprint of HarperCollinsPublishers

All rights reserved under International and Pan-American Copyright Conventions. By payment of the required fees, you have been granted the nonexclusive, non-transferable right to access and read the text of this e-book on screen. No part of this text may be reproduced, transmitted, downloaded, decompiled, reverse engineered, or stored in or introduced into any information storage retrieval system, in any form or by any means, whether electronic or mechanical, now known or hereinafter invented, without the express written permission of HarperCollins e-books.

Find out about HarperCollins and the environment at

We made the most of the snow while it lasted: after breakfast on Saturday we all went tobogganing in a nearby park, then in the afternoon we made a snowman in the garden and had a snowball fight. But as often happens in England after a snowfall, the thaw quickly set in. On Sunday the garden began to reappear, revealing a few brave crocus flowers that had survived the impact of the snow. By Monday there was just a slushy mess, although Melody’s snow angel was the last to melt. This wasn’t wholly surprising, as the snow had been compacted by Melody lying on it, and it was in a shaded part of the garden. But for Melody it was a sign her mother was close by and thinking of her; I agreed she was.

I took Melody to school as normal on Monday morning, but my day was very short, as I had to return to the school for 2.30 for her first review. Dressed smartly in what my children refer to as my office outfit – navy skirt, blouse and jacket – I arrived for the review in plenty of time and signed the Visitors’ Book. One of the secretaries showed me to the Headmistress’s room where I’d gone when I’d first brought Melody into school, and it was now being used for the meeting. Jill and a man I hadn’t met before were already seated in the two armchairs. Extra chairs had been brought in and placed either side of the sofa and armchairs to form a circle. Jill smiled, said hello and introduced the man as the Independent Reviewing Officer (IRO), who would chair and minute the meeting. IROs are qualified social workers with extra training, but they are not connected with the social services. Having said hello, I gave him the review forms Melody and I had completed and sat next to Jill.

Almost immediately the door opened and Miss May and Mrs Farnham, the Deputy Head, came in. They said a general hello and sat down, Miss May in the chair to my left. ‘Melody is with her class now,’ she said to me. ‘I’ll bring her up later.’

‘Is that all right with you?’ Mrs Farnham asked the IRO, checking procedure.

‘Yes. I think at her age she can come into her review towards the end when we’ve finished talking.’

The door opened again and Nina, the Guardian, came in. She said, ‘Good afternoon,’ then crossed to the two-seater sofa that had remained empty. ‘Am I all right to sit here? You’re not saving it for anyone?’

Neave now entered with a young man I guessed to be in his mid-twenties. She said hello and he smiled a little self-consciously – I wondered if he was a trainee. She sat next to Nina, while he took a free chair on the other side of the circle. Everyone had a folder or notepad with them, including me. It was now 2.30 p.m. and the IRO asked if we were expecting anyone else.

‘Let’s begin then,’ the IRO said, and he opened the meeting by thanking us for coming. ‘This is Melody’s first review,’ he said. ‘Can we start by introducing ourselves?’ He gave his name and role, and we then went round the circle giving our names and roles. I learned that the young man who’d come in with Neave, Gareth, was a student social worker on his final work placement. There were eight of us, so it was a medium-sized review. The number attending a review varies depending on factors including the complexity of the case. As is usual at reviews, the foster carer – with up-to-date information on the child – was asked to speak first. I drew myself more upright in my chair and glanced at the sheet of paper I held on my lap. I began by saying that Melody had settled in and was eating and sleeping well, and had reasonably good self-care skills, although she needed reminding to wash and brush her teeth sometimes. I said she’d arrived quite dirty and with head lice, but I’d treated those straight away, and that I’d seen none of the aggression mentioned in the referral.

‘So you wouldn’t describe Melody’s behaviour as challenging?’ the IRO asked.

‘No. She was obviously upset at being parted from her mother, but generally she’s settled in well.’ He nodded and made a note. I then spoke a little about Melody’s routine and what she liked to do in her spare time.

‘Does she attend any clubs outside school?’ the IRO asked, looking up from the notes he was taking.

‘Not yet, but I’m hoping she will do soon. I’m trying to find out what she’s interested in.’ Children in care are expected to have the same opportunities as the average child; sometimes they have many more.

‘I’ll put that as a target then,’ he said. Reviews like targets.

‘On that subject,’ I said, ‘Melody has swimming lessons at school and I would like to take her swimming sometimes at the weekends and during the school holidays. I understand from Melody that her mother is very anxious about her drowning and wouldn’t be happy if I took her, so I haven’t yet. Can I have permission to do so?’

The IRO looked at Neave as he spoke. ‘I think that’s reasonable, don’t you? We can give permission. Melody is on a care order and her mother has been sectioned.’

‘You’ll obviously supervise her,’ the IRO said to me.

‘Yes, and she’ll be wearing armbands as she does at school.’